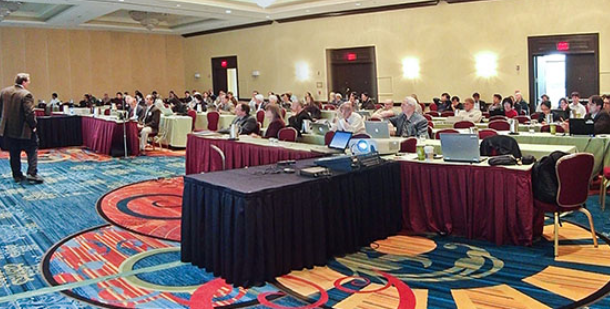 German chancellor Angela Merkel gave a speech at the 50th Annual Meeting of the World Economic Forum in Davos on 23 January 2020, which included a section on climate change. It says:

How do you reconcile those who simply do not want to believe in climate change and who act as if it were a question of faith? For me, however, this is a classic question of evidence that is absolutely clear in the light of scientific data. But since we live in an age where facts compete with emotions, one can always try to create an antifacticism through emotions, which is then just as important. So that means we have to reconcile emotions with facts. That is perhaps the greatest social task. In order to tackle it, at least we have to talk to each other. The irreconcilability and speechlessness that sometimes exists between those who deny climate change and those who see it and fight for us to tackle it must be overcome.

There are many people here talking to each other who otherwise rarely speak to each other, but there are not enough people talking to each other. If we enter a world where speechlessness is perhaps sometimes even greater than it was during the Cold War, when there were fairly orderly exchange mechanisms, then we have a problem. That is why I would argue that, however difficult it may be, we should exchange ideas – even between groups with the most controversial opinions – because otherwise we will only live in our prejudices and bubbles. This is much better in the digital age than in earlier ages. That could be the downfall; and that must be overcome.”

Chancellor Merkel calls for the different camps in the climate debate to talk to each other. This is very laudable and right. But now the representatives of the climate alarm line are doing their utmost to NOT talk to the climate realists. If Ms. Merkel took her own call seriously, she would create forums where we can talk to each other in a structured manner (without emotions). However, she has so far failed to do so.

Most of her consultants come from the Potsdam PIK Alarm Institute. This is also not balanced.

Merkel’s proximity to PIK has probably led her to use the term “denying climate change”, which is more in the vocabulary of Greenpeace than that of a head of state. A bad faux pas. Let us generously overlook this.

It will be interesting to see whether Merkel will now put her words into action. Where and how can the two climate camps discuss with each other objectively. Who moderates such discussions? What happens to criticism that is expressed in such discussions? Couldn’t such a round table on climate change define a series of research questions in order to have disputed points examined in a targeted and scientifically neutral manner?