Energy prices going through the roof

Prices for natural gas, coal, oil and electricity have been rising massively since the middle of the year. The price of a kilowatt hour (kWh) of electricity has almost tripled to 13 euro cents per kWh on the Leipzig wholesale electricity exchange.and the price of natural gas has increased fivefold.

Politics in Germany are not entirely uninvolved in the development of prices. The reasons are:

– Tripling of CO2 certificate prices since 2020 from 20 to over 60 euros per ton of CO2. This also affects gas-fired power generation

Although Russia has delivered exactly the volumes of gas as ordered by gas importers, obviously not enough gas has been ordered, as even Chancellor Merkel admitted. 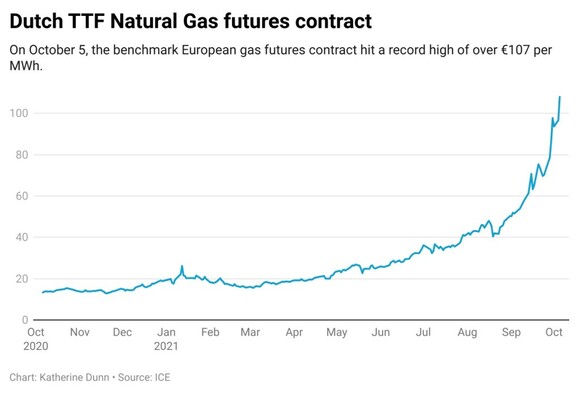 Electricity prices are also shooting up

Electricity prices for industry have tripled, and household electricity will rise from 31 euro-cent/kWh to around 40 euro cent/kwh. Well over half of the electricity price is taxes, surcharges and levies. There would be plenty of opportunity for the German government to reduce costs.

There won’t be electricity to power electric cars

Another serious problem will soon be the shortage of secure power generation because of Germany’s nuclear and the coal phase-out, which has already begun. Not only is this driving up prices. There will be risks of power supply outages during the winter, with possible targeted or involuntary shutdowns to keep the grid from collapsing.

By 2030, there will be neither power for a single additional electric car nor additional CO2-free power for industry. Never mind the heat supply.