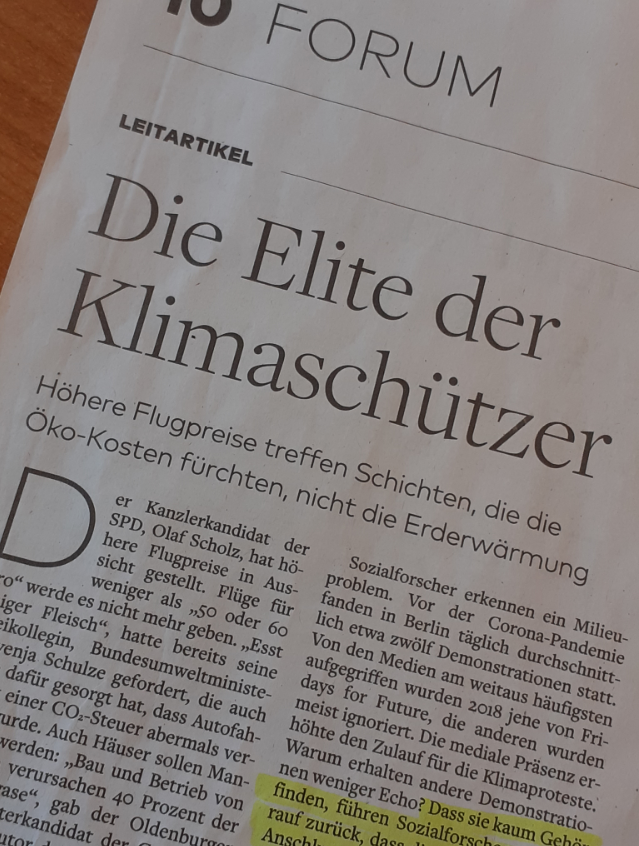 “The Elite of the Climate Activists”. ‘Welt am Sonntag’ leading article by Axel Bojanowski.

As Germany’s September national elections approach, politicians have been announcing ideas they believe will help save the planet, and thus think are popular among the public. Many of these ideas and promises include higher prices on CO2, Co2 intensive products (like meat, cars, single family homes and flights) and/or outright bans.

But these politicians run the risk of seriously misjudging how such measures will come across the working classes, many of whom are already weary of the Corona lockdowns and restrictions, and are struggling to make ends meet.

Already 20% of Germany’s citizens are living near the poverty level and 6 million survive only with government assistance.

“For them and their children the cost of climate protection is a much greater threat than climate change,” comments Bojanowski. “Also other groups who struggle to make ends meet like the self-employed and small company owners have a particular reason to worry about additional costs and regulations.”

Germany’s transition to green energies, the Energiewende, was promised in 2004 to be affordable – not to cost more than one scoop of ice ice cream a month. But that promise has melted away faster than ice cream on a hot day. Fuel prices have since surged and Germany’s electricity prices are near the highest in the world, if not already the most expensive – and the country still remains very far away from being CO2 -free.

But instead of easing the pace of transition to green energies, and thus the pain for citizens, Angela Merkel’s government has doubled down and now pledge to become CO2-neutral already by the year 2045 – in just 24 years!

Have there been protests? Plenty says Bojanowski. The problem, though, is that they have been ignored by the media, who prefer instead to keep their focus on Fridays for Future climate protests.

Why are the media not taking the other protests seriously:

“That they get little attention can be traced back by sociologists in that those affected have hardly any access to mass media – in contrast to the climate movement. According to researchers of the Sinus Institute, for the classes of the ‘intellectuals, established and sociological’, climate change is especially important. Many journalists belong to these classes, other studies show.”

On one hand in Germany, we have masses who are out protesting real problems but not being listened to. And on the other hand we have a smaller class of elitists protesting climate change and getting all the media attention.” Climate change is the dividing issue.

Another problem, Bojanowski points out, is that most government climate measures have been aimed at assisting the rich in buying new electric cars, and helping them revamp their luxurious homes to use smart green energy systems. “Again those profiting are the climate-interested elites, who are able to afford flights.”