Two University of Oslo physicists designed several variations of a tabletop experiment trying to confirm the IPCC’s claimed CO2-forcing capacity. Instead they found (a) 100% (1,000,000 ppm) CO2 “heats” air to about the same temperature that non-greenhouse gases (N2, O2 [air], Ar) do, and (b) no significant temperature difference in containers with 0.04% vs. 100% CO2.

Observations, experiments do not support a large forcing effect for CO2

Indoor tabletop experiments also demonstrate there is a very small temperature difference when adding 100% CO2 to a container. And even this tiny temperature change can be attributed to the reduction in convective cooling effects of adding CO2 molecules, not the radiative or “greenhouse” effects of CO2.

There is also no temperature difference detected when comparing CO2’s “heating” capacity to that of a non-greenhouse gas like Argon (Wagoner et al., 2010), as the “temperature rose by approximately the same amount and at the same rate as for CO2” when 100% Argon was used.

The fundamental assumption of the greenhouse theory is that increasing the CO2 concentration by a factor of 2 or more (i.e., from 0.03% to 0.06%) leads to 2 to 4 degrees of additional warming (at least), aligning with expectations from the Stefan-Boltzmann law.

Instead of observing these strong temperature responses to increasing CO2 concentrations, Seim and Olsen found there is almost no effect at all – perhaps an additional 0.15°C at most – when adding pure (100%) CO2 to a halogen-heated chamber (+30°C). There isn’t even a detectable difference in temperature when comparing the temperature effects of CO2 to a non-greenhouse gas like Argon.

The results of these experiments led the authors to “question the fundament of the forcing laws used by the IPCC.” 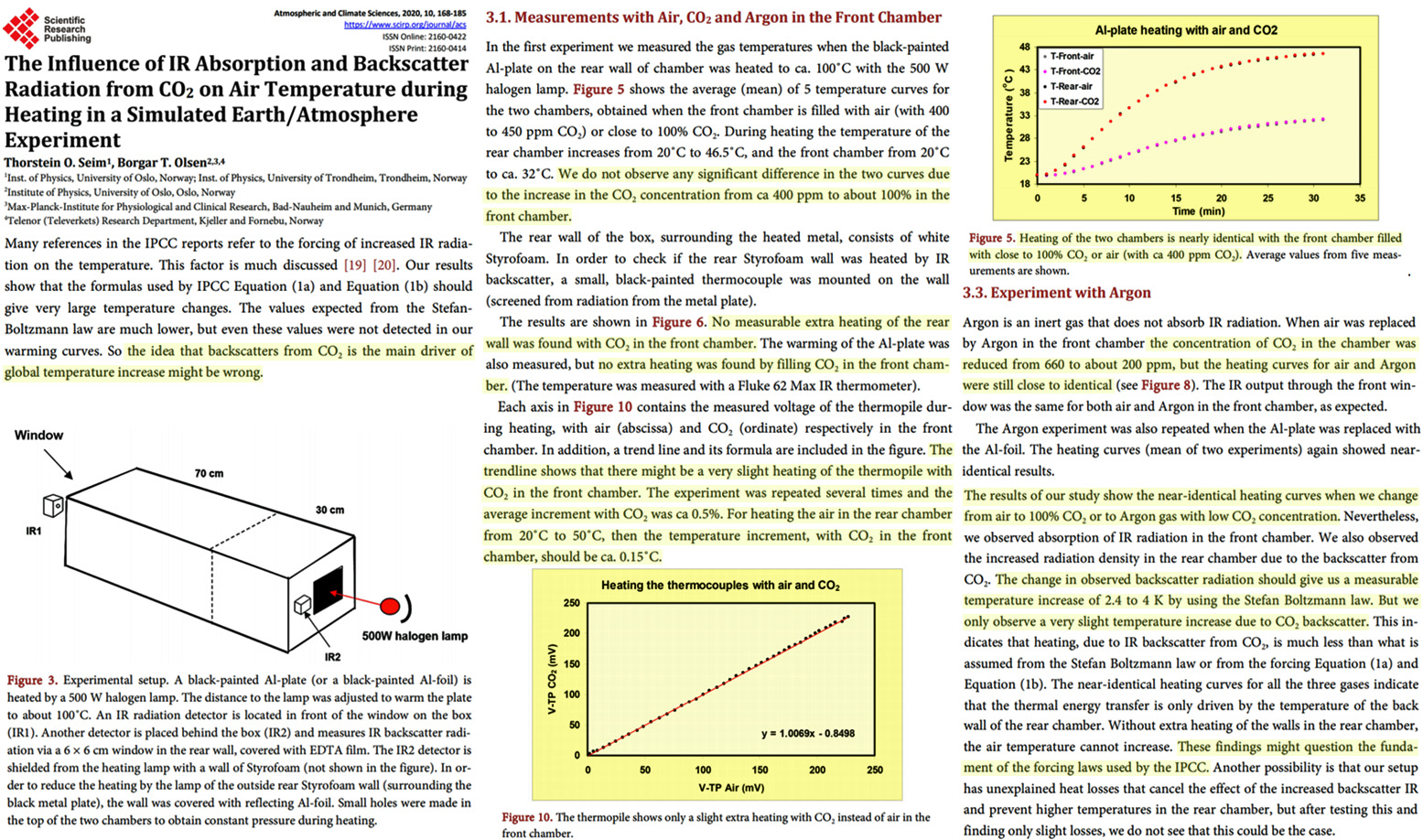 Notable quotes from the Seim and Olsen, 2020 study:

• “[T]he idea that backscatters from CO2 is the main driver of global temperatures might be wrong.”

• “We do not observe any significant difference in the two curves due to the increase in the CO2 concentration from ca. 400 ppm to about 100% in the front chamber.”

• “The results of our study show the near-identical heating curves when we change from air  [N2, O2] to 100% CO2 or to Argon gas with low CO2 concentration.”

• “The warming of the Al-plate was also measured, but no extra heating was found by filling CO2 in the front chamber.”

• “These findings might question the fundament of the forcing laws used by the IPCC.”