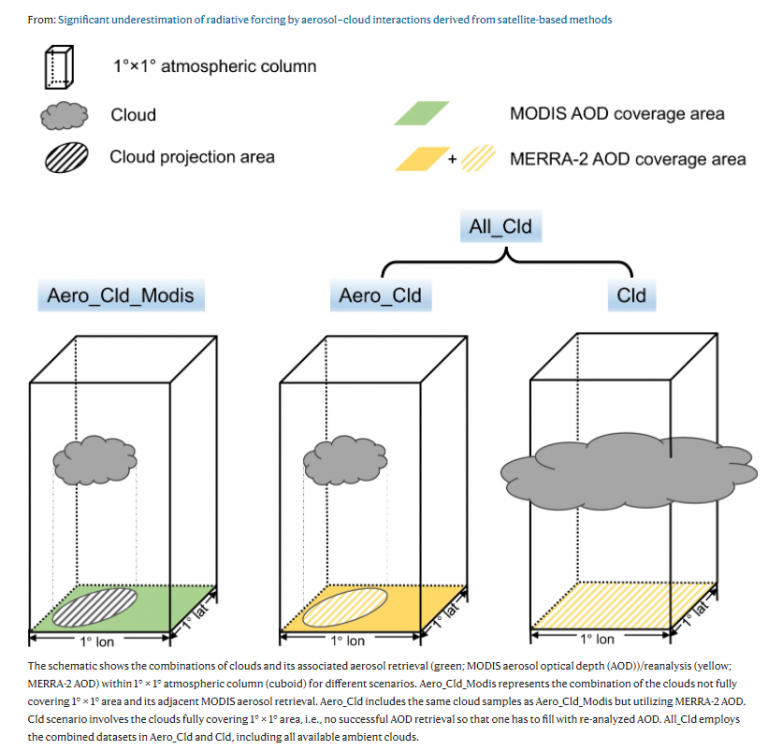 The new paper’s abstract notes that satellite-based estimates of radiative forcing by aerosol–cloud interactions (RFaci) are consistently smaller than those from global models, and thus hamper accurate projections of future climate change.

That means that climate modelers are not simulating the climate system correctly, and thus makes accurate climate projections unlikely.

“An increase in CCN number concentration will generate a cloud with more droplets,” the authors say. “The consequence is scattering more solar radiation back to space, thus exerting a negative climate forcing.”

The authors show that the discrepancy could be substantially reduced by correcting sampling biases and satellite measurements tend to artificially discard the clouds with high cloud fraction.

This has significant implications, as the missed clouds exert a stronger cooling effect and are more sensitive to aerosol perturbations.

By accounting for the sampling biases, the magnitude of RFaci (from ?0.38 to ?0.59?W?m?2) increases by 55% globally (133% over land and 33% over ocean). Notably, the RFaci further increases to ?1.09?W?m?2 when switching total aerosol optical depth (AOD) to fine-mode AOD that is a better proxy for CCN than AOD. In contrast to previous weak satellite-based RFaci, the improved one substantially increases (especially over land), resolving a major difference with models.”